Strategies for Healing, Inc. > Blog > Life Vessel > There’s Nothing Merry About Riding a Merry-go-round of Fear and Anxiety

Riding a merry-go-round of fear and anxiety is an everyday occurrence for too many people—especially when there are constant reminders on the news and in social media of reasons to remain in a state of fear and over anxious thinking.

When trauma happens in your life, you might be under the impression that once the trauma has passed—it’s over. However, the after-effects of trauma can last a lifetime if left unaddressed.

For this particular blog post, we’re going to identify that merry-go-round of fear and anxiety responses to better understand the necessity of regular, and consistent, relaxation-inducing, light and frequency therapy such as what you receive during Life Vessel sessions.

When the body is in a constant state of fight or flight due to financial concerns, political controversies, rumors of wars, and everyday dramas played out by imperfect human beings, we are presented with constant opportunities for fight or flight.

Fear-triggers demand action. Nature has made it so that a chemical (adrenaline) is released into the brain to engage our muscles and organs in preparation for fight or flight.

Unfortunately, in our world today, marketers focus on creating fear-triggers to get consumers to act—to purchase or buy, whatever it is that they are selling.

For instance, an advertising company will create a campaign to convince you that you will be rejected and ridiculed if you don’t use their particular brand of deodorant.

When you do buy, your expectations have been manipulated to the point that you might actually believe those promises … which of course, don’t manifest as promised.

On a greater scale, media channels focus on stories that they exploit and sensationalize so that you’ll stay watching their station for more news, or the most recent updates that are “only on their news station.” All the while introducing more commercials for more products they want you to ‘flee’ towards purchasing.

And the merry-go-round turns round and round …

Adrenaline (or epinephrine)—A molecule that acts as both a hormone and a neurotransmitter. Adrenaline is synthesized during times of stress and produces various effects that include increased heart rate, sweating, and increased metabolism.

Fear—A distressing negative sensation induced by a perceived threat. It is a basic survival mechanism occurring in response to a specific stimulus, such as pain or the threat of danger.

Fight or flight—An organism’s response to fear is to make the decision whether to flee or to fight.  [credit]

Day after day … week after week … month after month … year after year … fear and stress-triggers pound your brain and senses in a consistent barrage of pressure that over time, feels normal—like breathing. But it’s not anywhere close to breathing. In fact, it has the opposite effect. Subconsciously, you’ll find yourself in a state that is similar to holding your breath … waiting for the “other shoe” to drop.

As anxiety builds, muscles tighten, lungs breathe shallowly while the brain is flooded with chemicals to engage the body towards fight … or flight. All of this is done on a subconscious level. Anger, resentments, frustrations, and poor decision making occur when the brain is in this state. After a while, the body begins to wear out from the constant stress inducers and disease sets in. 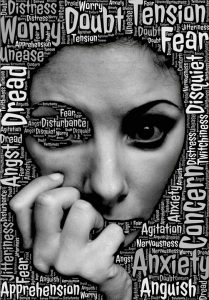 Unlike healthy stress that challenges a person to grow and excel in their efforts, unhealthy stress is magnified by negative thinking and destructive “stories” that are placed upon certain emotions in an effort to understand and explain their existence.

Without understanding the war, the battles are never won! The exhausted body is not given a chance to repair itself or to “reset” the negative responses that have become “normal” and highly conducive towards introducing disease into the body.

Now that you have a basic overview of this anxiety-driven merry-go-round, you can choose to get off!

An imbalanced body is one with an autonomic nervous system all out of ‘whack’ and one that is desperately in need of rebalancing. This is how sessions in the Life Vessel will introduce to your health and well-being.

Watch this 12-minute video to more fully understand what the Life Vessel is, and what it can do for you.

To understand the chemistry of fear and fright, visit this NBC Learn page to watch several short videos focusing on this topic.

Contact us to schedule your first session in the Life Vessel or your continued sessions for optimal health.